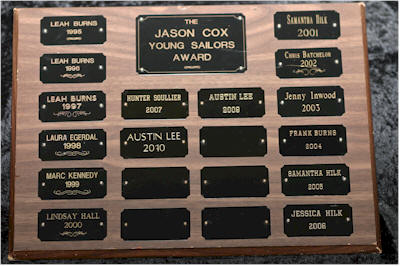 Young Jason was involved as well, crewing on anyone's boat he could snag a ride on. Jason was always the one seen smiling from ear to ear on the racecourse. He was an excellent sailor and loved the sport.

Jason also had severe diabetes and he succumbed to the disease at a very young age. It was a huge loss to the CRAM family.

Jason is remembered with this youth award. It celebrates the young people in our club who exude the same kind of enthusiasm for the sport.