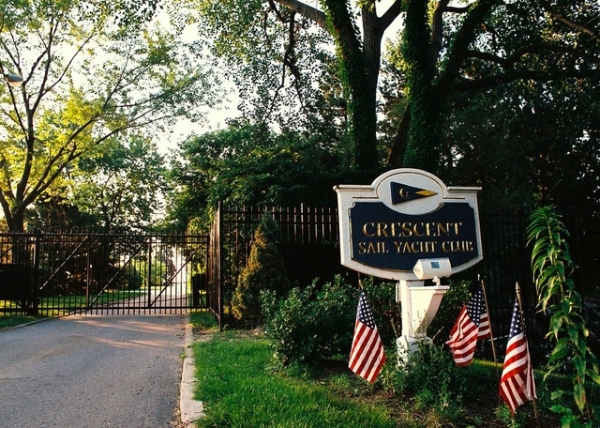 CRAM typically starts the season in mid May at the Crescent Sail Yacht Club on Lake St. Clair near Detroit. Every year the organizers stay in close touch, anxiously watching the weather. In past years we’ve had to cancel the regatta the day before it started – especially because wind, air and water temperatures were matching. Think about that… ☺ This year’s forecast was not quite drastic enough to do so.


In keeping with the growth we’ve seen over the last few years, we had a really good turnout. Friday was a fun night with many teams we haven’t seen in a while and others even longer (6 F18s, 3 F16s, 3 Hobie 16s and a Hobie 17). Dan Borg and Chris Molder from Toronto were here and so where John Bauldry and Matt Bounds. Kelly and Joe Buchert are trusty guests, who pulled their boat all the way from Kentucky. It was a nice boat rigging party in a decent, warm late spring evening.

However, the next morning was completely different! A cold front came through and the temperature dropped drastically overnight to high 40s and the winds were in the 20s gusting over 25 combined with a water temperature of 50F. CRAM commodore Jeff Rehm spoke to the teams and had to make the difficult call in the first regatta of his season – no racing for the day.

To keep everybody entertained, we went to church. Well, it was a church and is now one of the local’s favorite breweries (Atwater). Thereafter we visited a local museum about the history of the Great Lakes, learning about many fascinating and grueling stories about storms and lost ships. This worked great, as we wanted to offer something for our out of town guests. We rounded off the day with a delicious barbeque back at the club assembled by Christy Higgins.

Then it happened. The next morning I looked out the window I saw it snowing! The thermometer in the car showed 35F and it still seemed quite breezy. After a fairly quiet discussion and some concerned faces, we decided that we needed to at least give it a shot to race. A few boats went out while other teams stayed on shore to watch the ones braving cold waters, winds and everything else cold.

Joe Buchert was able to resolve the issue that his wife Kelly did not want to go out, simply by single handing his F16. While the offshore breeze on the way out was quite acceptable, fast moving clouds and showers with actual snow flurries brought gusty conditions once out on the water. You had to be on your toes to not to get tossed into the cold water. My thoughts went shortly towards the dangers of hypothermia, but I decided to think warm and pretend that I am sailing in Florida.

The F18s and 16s started two races. Both were won by Frank and me, despite being over early in the first race and overstanding the gate in the second race. None of the F18s or F16s took a dive. Two Hobie 16s where battling it out in 3 races. They both flipped – one of them several times, but got back up and asked the race committee for another race with smiling faces. James Derck with crew Nikolai Hedler won in the Hobie 16 class.

Despite not racing on Saturday it was a great weekend, especially as we did pull off 2 races on Sunday. When we saw kids going out in their Optimists in the afternoon, a comment was dropped: how embarrassing it would have been otherwise. Even those who did not sail had a great time meeting sailing friends again after a long winter in Michigan.
Read 81 times Last modified on Saturday, 30 December 2017 16:16
Tweet
Published in writeups