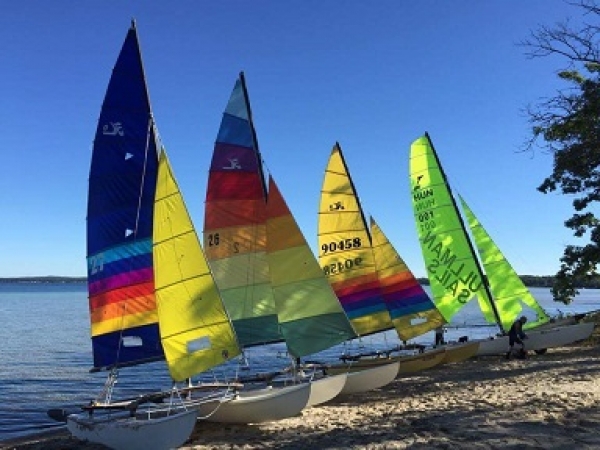 This has been quite an incredible year to say the least, and I wanted to take a moment to thank our 2016 Hobie 16 members. It has been an honor to server as your fleet captain for the past two years. My decision to move to the F18 fleet came with a heavy heart. Ever since I joined CRAM I have looked with envy to our bigger catamaran brothers, but with my opportunity to move up it was difficult thinking about the fleet I was leaving behind. It’s not all about the competition, but the friendships forged that mean the most.


It amazes me what we have done in the past two years with our motley collection of 30 to 40 year-old cats. We have come so far from the 4 boats who showed up to make a fleet at Caseville 1-2015. This past season looked promising from the beginning, and I made sure every Hobie skipper in Michigan knew that 2016 would be the year of the 16. Hobies were at nearly every regatta and in great numbers! I can’t thank you all enough. The racing was great, but the skippers and crew is what will make it unforgettable. We made 2016 something to remember. That something isn’t just about the 16s, but something more. This was a turning point that made it obvious CRAM is for all beach cats no matter the type or age and is for all sailors no matter their skill level or budget. We did something great, and I can’t wait to see where it goes.

While I may no longer be part of the Hobie 16 fleet, being within CRAM, and our great collection of people and catamarans, I get the privilege of still being around all of those who started as competitors that I now call friends. I hope to continue seeing more faces and Hobies at regattas. To new and current sailors my advice is always free, and my suggestions on how rig a 16 in an obsessive overkill manner are always available.