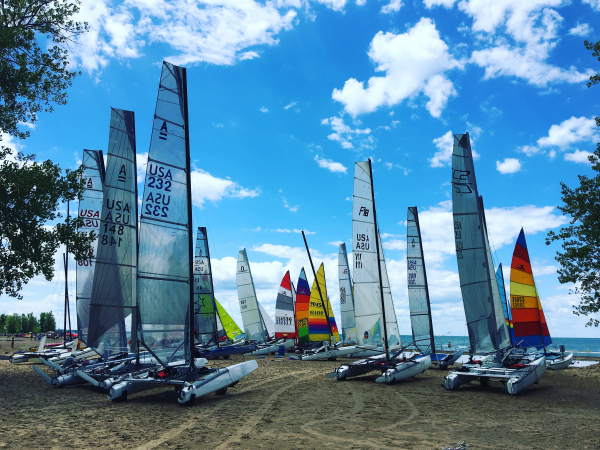 Caseville - July 2020
When the legend of Caseville 2020 has grown, and is known throughout the world in times to come, I will be proud to tell my grandchildren that I beat Bob Orr ONCE during this event!

Bob, Bill Kast, Warren Mitchell, and myself joined John Harper and Cesar Santana up in the thumb of Michigan for a great weekend of racing and good times. This event was a little smaller than usual, but still had 30+ cats of all kinds launching off a beautiful beach to race in a variety of conditions. The Hobie group up there is a little more laid back, with single-handed 16s, non-comptips, and even a Getaway and a Prindle 16 racing along with the A cats and the spinnaker boats. I think this is working for them; lots of young people, husband and wife teams, and a few kids as well.


Special note should be made of Matt Bounds, who did an excellent job of running the racing with John Bauldry on the ONE signal/mark/rescue boat, with some challenging weather conditions to boot. This might have been marginal from a safety standpoint, but the warm water and onshore breeze took some of the worry away. Bill can attest to that; his in-the-water board cleaning attempt led to a runway A sailing gently up to the sandbar off the beach, where I secured it just before Bill caught up after a Hobie 16 Uber lift.

Thursday set up and practice was curtailed due to brutal heat and no wind. Friday's start was delayed with storms and rain, but Matt managed to find an afternoon window to get in two races with decent wind and mostly trap conditions. Well, mostly for Bob and John and Warren; the bigger boys in the fleet had some difficulty staying on the wire. There were some holes on the course, which led to Bob and John splitting the races after pulling almost-horizon jobs. Saturday greeted everyone with nice wind, which always feels stronger when it's right in your face on the beach as you rig. Nice big waves out there too, which made launching and landing a bit interesting. This wind died down throughout the day, though, even sending us ashore for a lunch break before picking up again to allow two light afternoon races. Bob and John again split the first two races (although I SHOULD have had one of them), before Bob got tired of playing with us. He just took off upwind and played the waves great downwind, and took the next two races. You could hook up with some nice surfs on the big waves, but you could also hit one wrong and come to a stop. I LOVE the LR-5; I was actually out of the water most of the day! Thanks, Bob, I didn't make you regret the sale THIS weekend, but maybe soon... Sunday was more of the same; big waves but with little wind most of the time. You could still surf, but the waves were much more confused and it was hard to pick a take-off spot in the washing machine surface. Bob was over early once, went back, and still trounced us. One race he and John sat back start discussing whether or not there had been a general or individual recall while the rest of us took off, and once we had all gained a comfortable lead, he again came back and trounced us. The mighty Nikitorr ruled! Bill was showing some great upwind angles and speed; he and I spent one whole upwind leg overlapped. He also schooled ME in going low and slow on one downwind leg... Warren had some flashes of brilliance and took a 3rd; Cesar got it going in the light on the last race to almost do the same. Scores are posted on the CRAM website.

Great BBQ buffet at the campground on Saturday night, with varying degrees of social distancing, and the important stuff in town (Walt's for breakfast, ice cream shops, and the brewery) opened up over the weekend. All packed and on the road by 3 on Sunday, glad to be racing again.