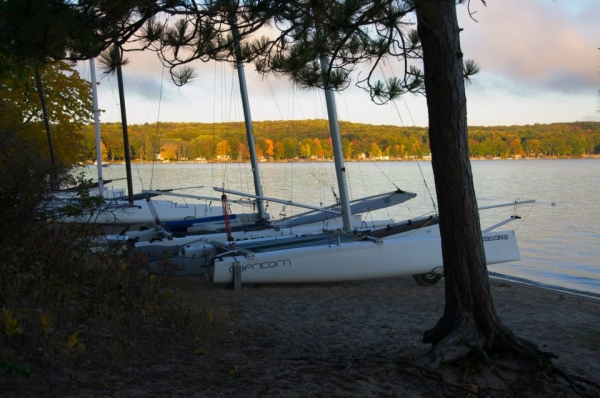 Higgins Lake State Park used to be a staple on the regatta schedule, sometimes being on the schedule in spring and fall. However, for a couple of years it did not make the cut given all of the other great sailing locations in Michigan.  This year though, Higgins Lake was back on the table!

As I do for every regatta weekend, I started watching the long term forecast as soon as it was available. Even 10 days out it looked positive (not like they can really tell), but it made me look forward to the regatta. Jessi was also excited to race and spend time with the CRAM crowd, even though she would miss seeing her sister who was going to be home from college that weekend (glad she has her priorities straight).

We managed to arrive at the state park early enough to assemble the boat and still have time for our traditional Schnabel Friday night steak dinner followed by the CRAM campfire by Roger’s RV.  We woke up Saturday morning to comfortable temps in the 40’s but no wind. 9 boats had made the trip and were lining the shore. The lake was beautiful, but absolute glass. The forecast differed between sources from light/variable (NOA) to 9mph (Weather Channel). RC was reading gusts to 2mph and racing was postponed to a 12:00pm start hoping things would improve. 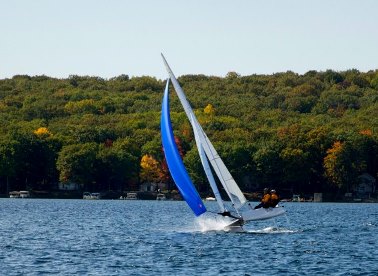 And improve they did. By 11:15am RC was reading 4mph and by the time we pushed off the beach at 11:30am, we had a nice breeze filling in from the North (North wind is optimum on Higgins). RC did a great job in running 4 races with average wind speed of 9mph. It was still a bit puffy and shifty, which allowed for some good changing of places. At the end of the day, everyone commented on how nice the weather and racing had turned out. A big thanks to Mike Wizniewski, who brought his powerboat and spent the day moving marks and taking lots of great pictures.

The evening festivities included the traditional annual CRAM Chili Cook-off with 5 entries and assorted side dishes and desserts. The judges had a tough time choosing a winner with Becca Kursch taking first place. The prize was a homemade apple pie donated by Ed Cunningham which Becca was not about to share with the rest of us. Hanging around the CRAM fire and recapping the day’s sailing was a perfect end to the day.

Sunday Morning turned out to be a bit chillier with a nice breeze. Some of us long-timers were remembering many Higgin’s mornings where we would stand around wrapped in winter gear or under umbrellas trying to convince the rest of the fleet NOT to go sailing. Inevitably, one die-hard would want to sail and all the rest then had to defend their season point standings. Not the case this year. The forecast was for sunshine and 10mph out of the E/NE. RC was right on time with the course and the first gun went off punctually at 10:30am. 3 races were sailed in more typical Higgin’s conditions, which means shifty, shifty and more shifty. Still, the sunshine helped and fun was had by all.

In the final tally, Mark Batchelor on a F-17 Uni finished in first place followed by the Schnabels on a F-18 in second and Roger Cochran on a F-17 Uni in third.

A special thanks to Ed and Tara Cunningham for managing RC, organizing the chili cook-off, and for providing the prize for the winning chili.

I hope that CRAM will return next year to this classic site.

back to top
CRAM Sailing