We'd love to say the sun always shines on CRAM regattas but that'd be a lie.  Fortunately, that doesn't stop us from having fun, and this year was no exception.  Below is a rehash of this year's challenging Muskegon regatta as told by Ed Cunningham - Vice Commodore and skipper of the 2nd place F18.  Credit to Ron Kramer for supplying the photos.
The drive across the state to our only Lake Michigan venue of the season started off dry but we crossed into the cold front and rain well before arriving at the beach in Muskegon. Not a big crowd Friday evening but there were a couple of mostly assembled Tornados and a few other boats already put together on the beach upon arrival. "Old Yeller" was relegated to the trailer for the night as skipper and crew stayed dry under the awning and visited away the evening. The beach area was pretty much ours as the inclement weather kept away most of the normal evening beach loop cruisers. 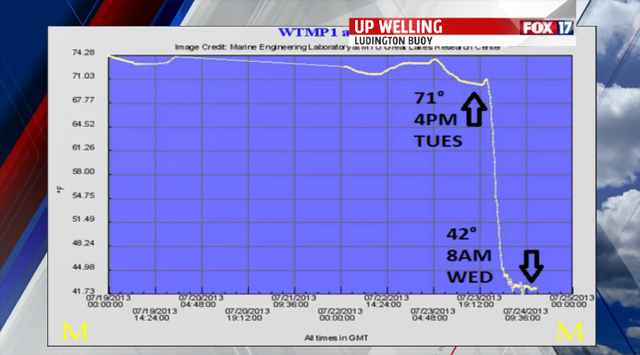 The big question Saturday morning was which weather forecast to believe....windfinder, NOAA, weatherunderground, etc... Winds from N to NW at 10 to 15 knts with gusts as high as 20 knts and 6 ft waves were the worst of the predictions. And, the locals reminded us that the lake turned over during the week in a storm causing the surface water to be in the 50's . With adrenaline high and fears kept at bay by the breakwall blocking the launching beach from the big surf, competitors weighed in that they wanted to try the big water for the day's racing. As soon as we turned past the lighthouse it was clear that the 6 ft wave predictions were every bit true. Oh well, turn down slowly to dodge a fishing boat and ease up the kite to find the race course. Thank you to RC for putting the course downwind of the breakwall.

Race 1 was quickly underway when all competitors finally made it to the course. There was not a lot of jockeying for position as everyone felt out their boat handling skills in the waves. And then we're off. Man, the 10' beam Tornados can motor upwind in these conditions! Truthfully the wind was very steady and not too strong at around 14 knts but neither skipper nor crew could afford to take their eyes off of the upcoming waves. First F-18 to A-mark, great. Now we have to turn down wind. After a few deep surfs the spinnaker pops and we're off. Heat up a little to catch the next wave, and another, a few more. Maybe we can almost stay with the Tornados down wind. But wait. The next wave didn't turn out so well. Slow capsize and cannon ball into the cold water. Note to self. Don't put down the traveler just before you need to dump it. After a relatively uneventful boat righting we limped the rest of the way to the gate getting our bearings and headed back upwind to try to catch the fleet. No further incidents in this race but no chance catching the fleet. 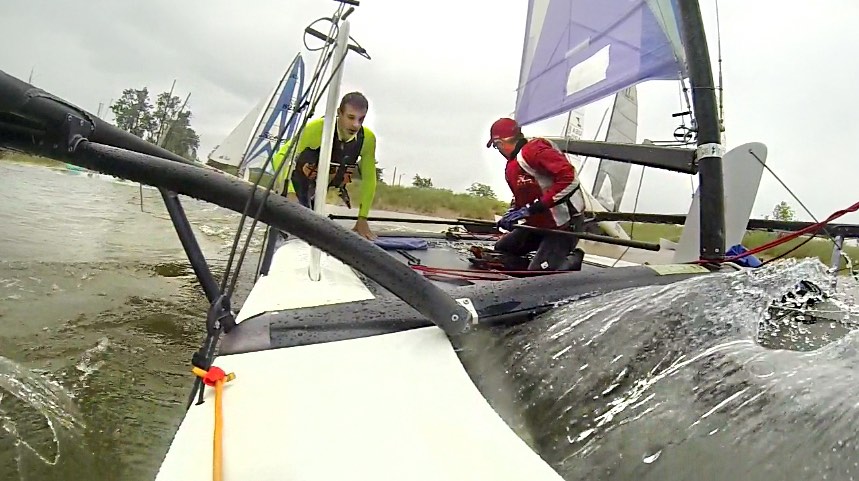 Parking between races is always worse than sailing in waves like this. And the down time lets the cold of the Race 1 swim sink in. We started Race 2 with crew shivering across the start line. I'm not exactly warm by this time either. The yellow boat is way overstanding A-mark, I'm sure others in the fleet were thinking. But by this time, the lighthouse was our turning mark. Others finished the race and some had thrilling camp fire stories to prove it. Wayne and Austin Tetlow launched airborne off of a wave on their H-20, turtled and righted their boat, and finished the race. Cold and physical drain set in as boats retired from the course to get warm. No more racing for today.

The evening burger grill out plus parking lot potluck was a success. Good food, good sailing stories, and no rain. The beach parking lot at Muskegon always seems to be the best venue for a CRAM parking lot party. The old Gene Cook CRAM grill also doubled for a fire pit. Thank you to Martin Malcheski for offloading some camp fire wood to burn. 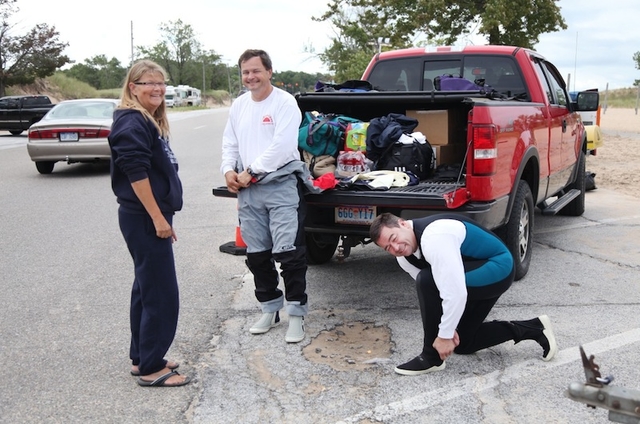 Sunday morning comes with a similar forecast for wind and waves with the addition of some morning rain. No questions today as to racing in waves or on Muskegon Lake. Sailors and RC alike were looking forward to flat water to ease the sore muscles. Now, just an easy downwind sail through the channel to the race course. That is until we actually got in the channel. The flags are no longer standing out and it begins to pour. As spinnakers hang like handkerchiefs in the rain Ron Kramer points his H-18 straight down the channel and passes us all. The shiny H-18 must have less wind drag than our spinnaker handkerchief. The wind started to fill in as we entered the lake. It's well past 10:30 am as we arrive at the race course. Sorry RC. I swear we left the beach at 9:45 am.

As race 3 gets underway we quickly realize that today's challenge will be reading the shifts. I wish my wet telltales were not stuck to the sails. We stuck with the knocks and lifts and made out as we were first boat to A-mark. Now just hold position and cover....cover....cover. First bullet of the weekend for Old Yeller.
Race 4 was more of the same except for the going the right way part. Playing catch up we split the fleet to try the other side and had to settle for 2nd in our fleet.

Wow, the wind is really starting to dump in the lake over the dunes. After two races I think we're going to be double trapped right at the start. RC throws a course 5 so we can head for the channel after we finish. Still shifty and up and down but no Higgins style T-bag incidents. Can't shake the Tornado but another F18 fleet bullet for Old Yeller. The real race starts after racing is done for the day in the tacking duel through the channel. Typical CRAM weekend. The sun and wind are both up at quitting time on Sunday.

This year's Muskegon regatta was a great event. Thank you to RC (Ben, Ian, and John) for sticking it out in the waves and allowing us the opportunity for the varied sailing conditions that were enjoyed by all sailors. Thank you to Nicky Inwood for arranging the memorable parking lot party, complete with camp fire. In the end, all were sore and tired but with smiles. Some more sore than others. We wish Billy Nies a speedy recovery for the shoulder he dislocated during racing on board Ron Kramer's H-18 on Saturday.