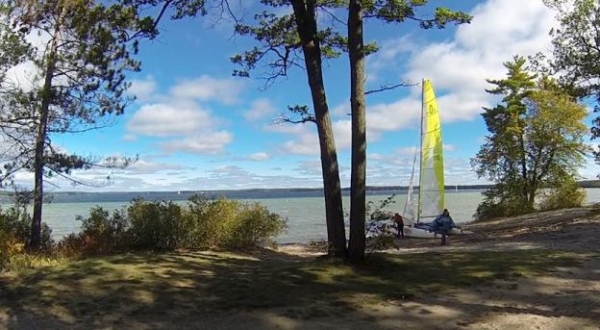 In typical Midwest fashion, if you didn’t like the weather just wait five minutes!

We had sunshine, rain, lots of wind, and no wind, forecasted weather for shorts and t-shirts, but turned to warm packs and dry suits - great suggestion from Tara Cunningham!

In terms of the weather, we really saw just about everything, except snow...Thank God!

Saturday started off a little cool and windy, for a second, I thought that I could see Ed Cunningham’s breath as he was giving us the details in the skippers meeting.

This being my third year sailing, second year racing, and second CRAM Regatta, I was too stoked to be sailing with these guys to really care how cold it was. I knew there was wind, a big lake and I was determined to go get a piece of them.

When I hit the water before the first race, and saw the LR5, F-18’s, and Tornado fly by - I quickly realized where my place was for the weekend....towards the back!

Then seeing Ron Kramer on the Hobie 18SX turtled before the start reinforced the fact that there was A LOT of wind; and I was REALLY going to have to be on my “A-game” to keep the boat upright.

Luckily, I have a smaller boat (and a few more pounds) than Ron does.

Saturday’s races started with sunshine, and wind in the 10-12 knot range, plus a chop that reminded you that you were in one of Michigan’s biggest lakes. Most of that held up throughout the day except for the sunshine. The rain and wind mix all day made for a great method of skin exfoliation, my face hadn't felt that soft in a while. But even worse, the rain made my GoPro camera fog up!  Although it made for a pretty cool picture!  Hull Yeah!!

As the rain came and went, the wind continued to pick up, I’m no expert but I’d say we had constant winds in the 15-17 knot range with big long puffs that were easily in the 20’s with the wind starting to let up during the second or third race. As I watched the other boats in my fleet in head to shore and the Nacra 18 square meter upside down (equipment issue) I remember thinking “well, everyone else is in, maybe I should follow”, but there was a louder voice that said “this is a blast, it’s what you came for, let’s do it!”

Sunday forecasted weather was supposed to be much lighter winds. Keywords “supposed to”.  One of those 6-8 knot days where skill really comes in. Instead, we had good chilly winds...building as we ate breakfast!  During my trip to the shower house, I witnessed multiple guys warming up their wetsuits with the hand dryers, always a good sign. :(

Sunday’s races started with great wind, somewhere in the 12 knot range. After consulting Dave Stiemsma, we were convinced that the wind would die down pretty quickly once the sun started to warm things up. Well that didn’t come NEARLY as quick as I thought. The first couple legs of the first race had great wind that seemed to be building with big puffs, almost too much for me. I was glad that I had heavy dinner the night before to help keep the boat down!!  Lots of great Chili to sample at the Chili Cook-off Saturday night!!

On my last downwind leg to the finish (after the quick guys finished already), the sun must have done its job because the wind shut right off. It seemed like it was going to be Monday before I finished!

After that race I got into shore just in time to see the finish of a great race between Martin Malcheski on a Tornado and Dave Stiemsma on the Hobie Wild Cat (Red Sail)...

.....a great example of match racing!!
Overall it was a great weekend! Thank you CRAM for a yet another great event! I’m looking forward to seeing you all next season!